Reprogram Sonoff Smart Switch with Web Server. I didn’t use this in the end, but learned the basics:
https://randomnerdtutorials.com/reprogram-sonoff-smart-switch-with-web-server/

My toaster had a mechanical problem: It didn’t release the bread, or turn off, when time was up – Instead it continued toasting forever. This is my second toaster of the same type that breaks. It’s obviously not reliable, but it does take long slices of bread

So I had the idea to control the power supplied to the toaster, instead of trying to fix its mechanics.

I got a couple of Sonoff WiFi relay switches off eBay, hoping to automate a few things at home. I soon realised it would not be possible because of the way they are programmed to work: They use your WiFi to connect to a global server, where you have used their “EWeLink” app to set up an on / off schedule for the switches. That scheme would be useless for my purposes for many reasons:

I already nourished a long-standing toast dream: To be able to sequence the toasting like this: Toast-Pause-Toast-Stop. I had previously noticed that the toast quality was increased significantly when I did this manually – The slices didn’t get dry on the outside and wet on the inside. Instead they became crisp all the way through.

I also wanted presets for different types of bread, or for users with various demands. 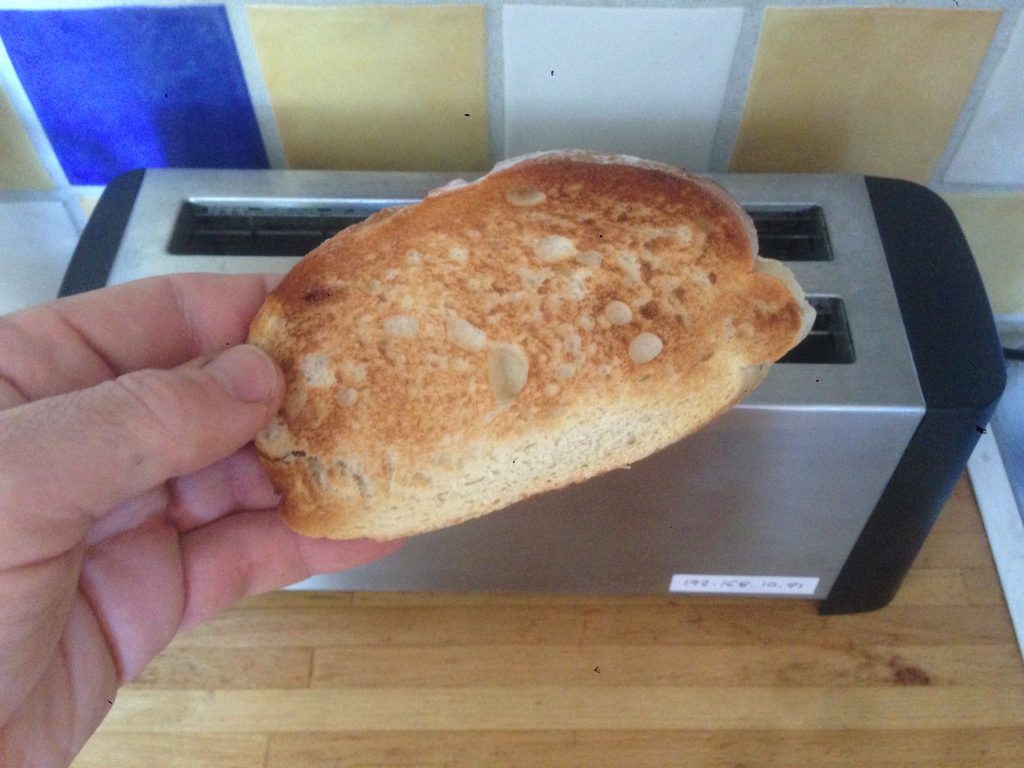 The Sonoff contains an ESP8266 processor that does most of the work. Most importantly ESP8266 has WiFi capabilities, which is why it’s used in many Internet of Things-applications. It’s possible to run a web server on the ESP8266, and have it serve a web page with a user interface for the Sonoff on / off switching. So in my case it serves a HTML / Javascript page with five buttons and a progress bar. The buttons select one of three toast sequence programs, a one-shot 30 seconds toast program or stop. The shortest toast program is for white bread that is a bit dry, the longest is for dark bread that is frozen.

To upload firmware to the ESP8266. I used Arduino IDE 1.8.1 and a USB-Serial TTL converter. I followed these instructions for wiring: https://randomnerdtutorials.com/reprogram-sonoff-smart-switch-with-web-server/

There was also info on what libraries needed to be installed, how to set up an ESP web server, connect to Wifi and more. A good place to get started.

Maybe not randomnerdtutorials, after all

I soon realized that the code on randomnerdtutorials would be dangerous for this project. It works something like this: When you click a button on the web page, a new page is loaded. Appended to the URL is the name of the button that you clicked. This is a common way to pass data between html pages. The problem is that when the toast program is finished, it’s quite possible that you still have this page (with the button name) loaded in your web browser. Which means that if you reload the page (which can happen automatically in many situations, ie on a computer restart) the toaster will start again.

Then I found this page: https://circuits4you.com/2018/02/04/esp8266-ajax-update-part-of-web-page-without-refreshing/ that demonstrates using AJAX XMLHttpRequest techniques to do calls without reloading the page. It was a better fit for my needs in many ways:

The circuits4you code is a bit hard to understand, partly because there are about 10 different variables and handlers with similar names, partly because of the involved parallel code structures in HTML, Javascript and C. That’s why people hate web development. Also there were some small errors in the code :) Anyone who has done some HTML can probably spot this one:

It’s not like we’re going to send an airplane to the web server. Also, data stored in Flash memory can’t be read into a C String variable like this:

I changed it to:

Here’s the finished ESP8266 code, which is actually an Arduino sketch. It could be optimized a bit, and the States and Steps could be better clarified but still

And here’s the code for the HTML page. It needs to sit in a file called index_html.h next to the main sketch file

Upper Left is the Sonoff. The Green Led shows the state: On for Toast, Flashing green for Pause 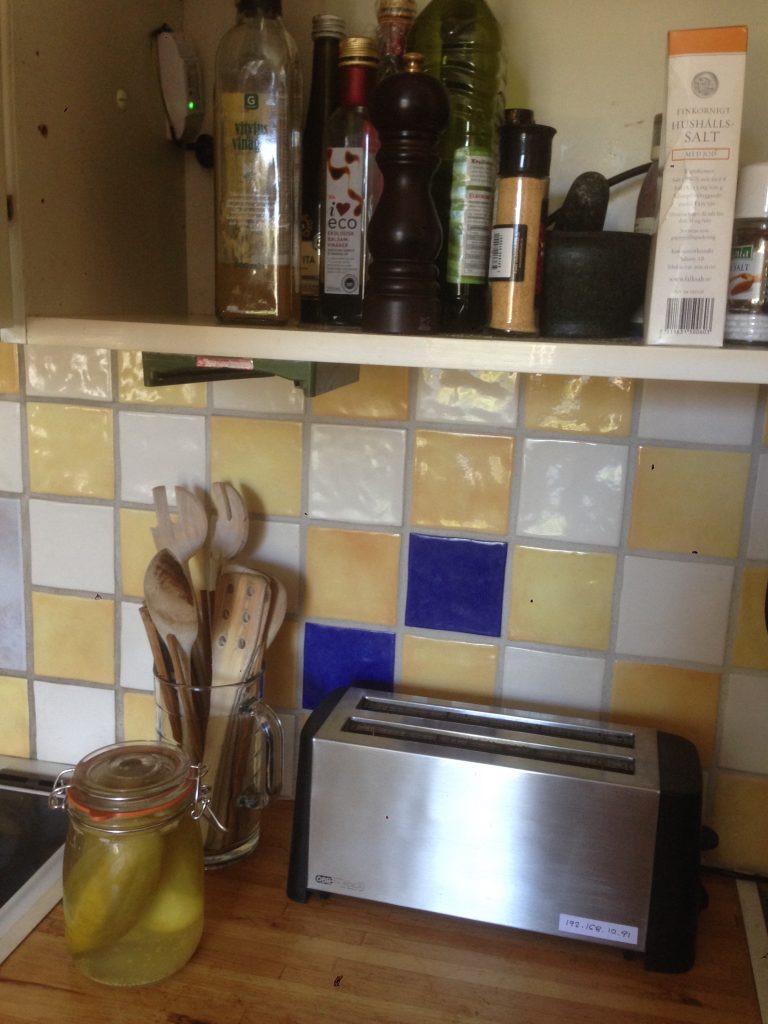